The Eggs Baked in a Portobello Mushroom Experiment

With one remaining portobello mushroom in the fridge I set out to make myself a breakfast treat inspired by this recipe and my favorite motto – put an egg on it!

The process was straightforward.  I first sprayed the mushroom with olive oil and seasoned it with salt, pepper, and garlic powder.  Then I baked it inside my counter-top toaster oven for 5 minutes on each side.  My kitchen filled with an amazingly rich mushroom aroma when I removed the portobello from the oven.  Then I carefully cracked an egg into the ‘bowl’ and placed the mushroom back in the toaster.  After 15 minutes of baking breakfast was ready.  I sprinkled it with some pepper, parsley, and parmesan cheese and served it with some fresh spinach.  Each bite had both meaty mushroom and runny egg. Perfection.

The next day, my husband picked up some more portobellos from the grocery store as he was eager to try this dish I couldn’t stop talking about. Halfway through the process though, as I cracked the egg into the pre-cooked mushroom, I was frustratingly unable to get the egg to sit inside of the cap! I scraped out some of the mushroom basin attempting to create a deeper bowl, but still the egg found a way to slip out one side or another.  So, breakfast then became a fried egg sitting on top of a mushroom.

The lesson learned here is that many grocery stores sell portobellos wrapped in plastic with the cap side up – which leaves you unable to see the bowl shape.  Many portobellos are far too shallow to truly hug an egg as it bakes. So, if you are setting out to make this I would recommend going to a farmers market where you can hand pick your mushrooms.  We did this yesterday and enjoyed inspecting each portobello in order to select the perfect vessel for our third attempt.

← Corn on the Cob with Garlic Paprika Butter
Scallop, Farro, and Arugula Salad with a Lemon Pepper Dressing → 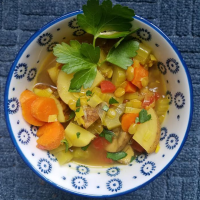